The first time I saw the video of the Dancing Guy at the Sasquatch Music Festival 2009 I couldn’t stop laughing, and the video still cracks me up every time I see it – I’m not the only one, by the way. The famous first viral video of the Dancing Guy at Sasquatch already scored more than 2 million views on YouTube, while there are several other version of the same scene taken by other people in the crowd, from different angles, and each of the videos already hit the several thousand hundreds views on YouTube.

So why is this video getting so viral? Simply because it’s a funny video, and also because it’s about a community – I bet each and everyone of the person in the crowd viralized the video on their own, spreading it out to the social web, sending the link to friends and sharing it on social networks. Let’s watch the video first, then we go back to discuss why it is also inspirational, beside of being funny.

There are several versions of the Dancing Man video. The one above it’s not the original version, it’s an edited video from a YouTube user who puts together the several key moments of the gig, reducing it all to 3.45 minutes. The original version, the one that made more than two million views (also embedded here below) lasts 3.06 minutes, but it cuts off the first part, when the guy dances alone for a long time. There is another version available on YouTube and embedded here below with the full 8.21 minutes filming, and I like also the multicamera version of it, a 3.19 minutes edit of the Dancing Man hit from a YouTube user (third video below).

Amazing, isn’t it? A weird guy starts a weird dance while everybody is relaxing and enjoying an afternoon live set with Brooklyn rapper Santigold at the Sasquatch Music Festival 2009, and he manage to start a great party in just few minutes. This is not even happening in front of the main stage, but on a lazy and sunny hill on the side of the main arena, a perfect chilling spot.

The Dancing Guy starts dancing and he is a weirdo – come on, just look at him and at his crazy, disarticulated dance. Some people look at him and laugh, then turn their heads aways, some other don’t even bother (note: but other festival goers are filming it). He doesn’t care and keep doing his thing. He eventually stops a couple of passers-by, trying to invite them to join him and the dance, but he’s not too convincing and they walk away. Not a problem, he keeps dancing until another weirdo joins him, and they start and even weirder duo dance. Strangely, this seems to attract another third person, definitely a weirdo too, and now they are three people having a crazy dance on the side of the sunny hill.

After a while, other two guys join, they look weirdos too, but they seem to have a stronger “social network”, as they also bring in a group of girls which attracts other people and, in matter of no time, it all gets crazy with everybody running across the hill as they all want to join the crazy dance party. The persistence of the Dancing Guy won it in the end – even if it all started like a big fail – bringing the party, the community and the success to a much larger audience. 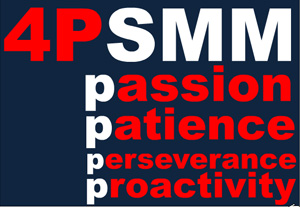 The Dancing Guy video is the perfect metaphor for the persistence needed to succeed on social media networks, one of the 4Ps of Social Media Marketing (passion, patience, perseverance, proactivity).

Under the social media marketing metaphor, there are some things to highlight. I showed the video to some clients and, beside of having a laugh together, I transposed the situation to a brand who decide to engage on social networks. Let’s see what we can learn from the Dancing Guy video.

Be patient, and be persistent
The Dancing Guy (who’s real name is Collins, from Canada) needs to be persistent for some time in order to start the party. If you look at the full-lenght video, you will see that he tried several times to hook up new friends with no success, but he was patient and persistent, and he manages to make it happen in the end. Sometime the kick-off of a social media strategy can be hard, and a company profile on social media networks can stagnate for months before starting attracting friends / fans / subscribers. This can be annoying but it is not a disaster. Do some more research, engage with more other users, and you’ll eventually find your right niche. Persistence is key (patience too).

No matter how weird your dance is, you’ll find people to dance with
The Dancing Guy is a weirdo, but this didn’t stop a healthy, fun-loving and regular dancing crowd. The call to dance was not an invite to be weird like Dancing Guy, it was just an invite to join the fun. No matter how difficult can be to promote your brand on social networks, you will definitely find your niche, if you operate a targeted social media marketing campaign. Most of your new friends won’t “dance like you do“, but you can surely share a conversation with them. Look also for a “long tail” of targeting – you can target users who are a secondary target for you if your first goal is to reach a critical mass for your community.

Are you dancing with the right people?
The Dancing Guy found it hard to put together a dancing crowd. His initial offer of a weirdo dance was not of interest for any of the users of the network (the sunny hill), so he kept dancing alone. He tried to convince a couple of people to dance with him, but his communication efforts had no success. Only when he finally managed to attract the right people (the guys who brought in the girls) he finally had the party started. Are you interacting with the right users on social networks? Do they have followers and fans? Are they active bloggers too, or group administrators / community managers? Good kick-offs generally need to secure the participation of at least a couple of e-fluencers, influential people and community leaders who can easily help you promote your cause and broadcast your communication to a larger audience.

It’s not about you, it’s about them
Recently Seth Godin, answering to a question about the big lesson learned on social media marketing, said that “social media is not about you, it’s about them“. Deeply true. For most of the people joining the dance party at the Sasquatch Music Festival it was mostly about having fun in a fun crowd, and not certainly about sharing their fun with the weird Dancing Guy. As a matter of fact nobody actually cared about him – when his “offer” was the weird dance, nobody wanted to buy in. Only when the offer changed from “weirdo dance” to “fun dancing crowd” people felt the urge of joining in. Don’t “push” on social networks, don’t “broadcast” – listen to your audience, and let the users express themselves freely, with no (or little) censorship. The party will start soon.

Get lost in the crowd
If you want to build a community, not only you cannot push and broadcast, but you also have to be ready to lose your individuality to be a member of a group. Of course you can still be one of the most active members of the community, engaging and contributing to all conversations, and of course you can still be the administrator of the community, specially if you are the one who started it – but you have to be ready to lose your identity in favor of the identity of the community. In the Dancing Guy video our weirdo starts dancing alone but, after a certain point, you cannot even see him anymore inside the crowd, all you see is other people dancing, and a party crowd. Sure he’s still in there doing his weirdo thing, or maybe dancing in a new way inspired by one of the new friends, but he certainly got lost in the crowd.

Always think about the viral wave
When the Dancing Guy started his dance alone, he was never going to imagine that he could have put together such a crowd, go figure reaching millions of people on YouTube (plus you who are reading this blog article). Power of the viral wave. Even if your community is not huge, remember that every tweet, blog article, comment on other people’s blog or post on social networks you will produce will be indexed by search engines, shared by users, picked up by RSS aggregators and re-distributed by a larger crowd.

Social means they are watching you
This is not in reference to privacy issues on social networks, a hot topic that I have been asked to address often when speaking at conferences, and that we will cover soon on this blog. Even when the Dancing Guy was dancing alone and nobody wanted to join him for the dance, other users where filming him. Once you decide to stand up and dance, somebody (your customers? your competitors?) will be surely watching you – even if they don’t sign up, and even if you don’t notice them. You can analyze the traffic to your site or blog and see how many views your videos count on YouTube, but yet you cannot really say who is reading your blog posts or who is visiting your Facebook wall. Having few followers or blog subscribers doesn’t means you have to lose focus and abandon your commitment to good content, publishing frequency and – most of all, specially in this case – quality contributions to other users’ online conversations.

Always remember to have fun!
This goes beyond the Dancing Guy, even if it’s obvious that everybody in the dancing crowd of the Sasquatch video is having fun. Passion is the first P in the 4Ps of Social Media Marketing. I keep repeating that, if you have no passion for your brand, product or service, you will have some problems in succeeding in the social web – you should also consider changing your job, but this is another story… Maybe you should try a crazy dance every now and then, like our friend Collins the Dancing Guy. Do you need a good track to dance to? Try “Unstoppable” by Santigold, the same tune the crowd at Sasquatch was dancing to!

At Global Search Interactive we run several social media projects for our clients and we have plenty of fun each time – but we know that, as for all good things, also social media marketing campaigns have to balance pleasures and pains, like the time and resources needed to engage in the conversations, or the creative copywriting and quality content to be produced and distributed following a regular publishing schedule and an editorial (marketing) plan. We understand this pain, and in our experience we have seen that most brand marketers and their in-house team are not ready to face it.

If social networks are not for you (or your team), you don’t have to get headaches. Most marketers who invest in direct mail don’t fancy licking thousand of envelopes and going through accuracy checks for typos at the printshop – this is why they hire direct marketing agencies. If you don’t have time, skilled in-house resources or creative content production capabilities, it’s always better to hire a social media marketing agency to do the job for you! =)