I love TED Talks, the series of inspirational keynotes that bring together the smartest people from three worlds: Technology, Entertainment and Design (hence, TED). Started in 1984, the project now got to a much larger scope, inviting to deliver a keynote the most influential, inspiring and ingenious people of our society, people with a vision, with courage and with a little more than something to say – they say things that can change the world, or at least your way of thinking.

TED is much more than TED Talks. There are two TED Conferences in Long Beach and Palm Springs each spring, a TED Global conference in Oxford (UK) each summer, the TED Talks video site, a TEDx program for TED events worldwide (one of the most famous is TED Talks India) and an annual TED Prize award. TED spreads out also into the Open Translation and Open TV Projects, equally cutting edge initiatives.

Among the TED Talks that really fascinated me over the last times I can suggest to take your time to listen to s few keynotes. I tried to make a shortlist of my favorite TED Talks, but it is impossible, they are so many! Anyway, I can certainly list of the keynotes that made me change (or refine) my way of thinking, enlightening, entertaining and definitely inspiring me both at personal and professional level, sometimes even beyond that:

I’ll better cut this list down, I can easily list a few more dozens of inspiring TED Talks keynotes! =) 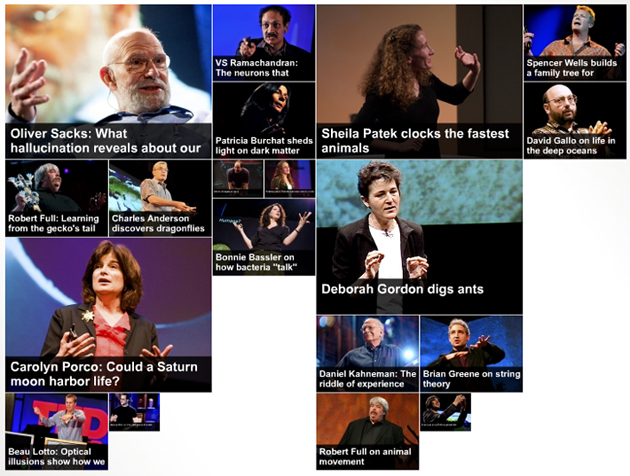 Since many of these keynotes are long (some go even up to 20+ minutes) and I know my readers don’t have the time to explore them all, I invite everybody to find the perfect inspiration by browsing the 700+ TED Talks published online on the TED Talks website. You can browse all TED Talks by category  (technology, entertainment, design, global issues and so on) or by the emotional mood you want to get with the TED Talks ideas: persuasive, courageous, ingenious, fascinating, inspiring… what kind of idea are you looking for? Don’t have the time to browse all the ideas? Let them come to you by subscribing to the iTunes video podcast!

And, since you don’t have time, I publish here one of the shortest, albeit smartest and more inspiring TED Talks I ever watched, Derek Sivers, the creator and CEO of CDBaby.com, one of the major CD and DVD online stores, who deliver a keynote for TED Talks India and tells us a quick tale about diversity. A quick tale that can easily change the way you think at many of the “weird” things you come across every day in business as in everyday life.

Drop the stereotypes. Enjoy the show. And spread ideas worth spreading.